How to win the war? - strategic plans for victory (part one).

How to win the war? - the strategic plans for victory (part one).
The second Schlieffen's plan of 1905. 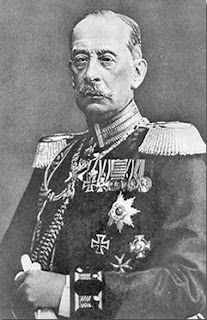 Alfred Graf von Schlieffen, 28 February 1833 – 4 January 1913
was a German filed marshal and strategist who served as Chief
of the Imperial German General Staff from 1891 to 1906.

In 1905 Schlieffen got the conclusion that it would be very hard, if not impossible at all, to defeat the French army with the frontal attack heading west. One of the reasons was that the main French army was protected by the fortification line, even if the German forces would split in two strong formations (according to his first plan from 1900).

Schlieffen has found the solution – the northern part of the French army must be surrounded and broken. And the way to do it is to move the huge German formation to the north, across Belgium.  The key factor was that this formation had to be strong enough to defeat the northern part of the French army at any circumstances. No matter where the French armies would be, no matter how long it could take to march throughout Belgium and how many reinforcements could be sent to the north. According to this task, that formation cannot be shaped as a spear, it had to be like a roller. 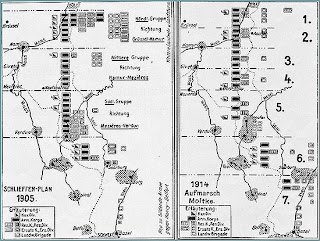 Another question was how strong such formation should be, how many troops are necessary to achieve the expected results. Schlieffen was not sure at the beginning but later the decision was made. 7/8 of the whole German forces were expected to be used at the western front, while only 1/8 was left to protect the eastern border. Such decision was not easy – the enemy on the east was the Russian Empire, with more than hundred million people. There was an ally, Austro-Hungary, that would support Germany on the eastern front, but was the Austro-Hungarian army strong enough to last out the Russian attack? This was not an easy question, but Schlieffen’s reasoning was cold and logical.
First of all, the Russian mobilization will not be as quick as German and Austro-Hungarian one. The estimation was that it would be finished when Belgium would be already defeated and German forces would be fighting with the main French forces already. Secondly, even if the Russians would be ready to start their offensive, the road to Berlin would be not quick and easy. They cannot go directly to Berlin as there are two flanks with the concentration of German and Austro-Hungarian troops: Eastern Prussia and Galicia. If they would be left there, they could attack the main Russian forces from the flank anytime and bring the advance to the halt. And last, but not least – even if the Russians somehow manage to solve the above mentioned problems, they still have to defeat the Austro-Hungarian armies in Carpathian and occupy the East Prussia. Only then they could go forward to Berlin.  All of those tasks are not impossible for the Russians, but they require time – a long time, according to the poor railway system on the east.

Schlieffen’s logic had won here – he has considered all “pros” and “cons” and had decided that it was worth the risk. There was only one more question – the possible protest of Austro-Hungary on leaving them almost alone. But Schlieffen had the answer – “the fate of Austria will be decided at Seine, not Vistula”.

Now it was the right time to think about the details of that plan. The first question was the neutrality of Belgium and Luxemburg, but it wasn’t a real problem. The real trouble was that Schlieffen really needed all the possible forces to be a northern part of this roller. This meant the area of southern Germany, from Metz to the Swiss border, was protected only by five corps.

What if the French forces will start their advance immediately? What if they break the weak defense here and advance to the Bayern, or to Berlin? What if they turn north, cutting off the German roller from the supply lines? How strong Schlieffen was to be able to answer all those questions:  ”No, I can still manage this. Nothing can be moved from the main northern forces to make the defense of southern Germany stronger.” And he knew that if any of the French forces would advance on the south, it automatically would make the northern flank much weaker – this was exactly what he expected. On the other hand, he was sure that at the moment he moved his armies across Belgium, all French forces would move to the north, being ready to stop the advance of the German roller. This meant there would not be any French offensive on the southern flank.

The reality in 1914 was exactly according to his foreseeing. The French pressure on the south weakened shortly, as all the possible troops were moved to the north to stop German advance.

This is the main reason between Schlieffen and Moltke. Schlieffen himself was strong enough to fight for keeping all the conditions of his plan without any changes. His logical minds had calculated all the possible risks and draw the conclusions. Sometimes it seemed that the plan couldn’t work, but he was able to resist the temptation of moving the forces from the north to other, not so important, places: southern Germany or protection of the supply lines. The German roller had to be powerful, quickly advancing and it had to defeat the French army no matter how strong it would be in defense. 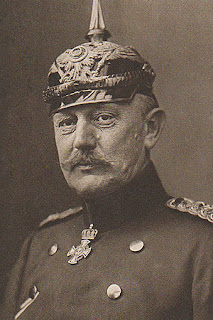 The numbers shows it clearly – Schlieffen’s main forces were the equivalent of more than 50 corps. Moltke has only 33 of them and during the war made his forces even weaker, by moving two corps from the western front to East Prussia, just before the Battle of the Marne. The forces Moltke has left on the south, to protect German borders, were two times bigger than the forces Schlieffen designed for the same task. Only 2/8 of the whole German army was left for all defensive tasks on all fronts, 6/8 of the German army was concentrated from Metz to Aachen and ready to defeat France.
Schlieffen’s second plan is the best example of the military plan with clear idea, one main task, and concentration of all the forces to achieve that goal. This doesn’t mean that Schlieffen’s plan, if not altered by Moltke, was the guarantee to win the war – but the first months of the Great War could be completely different if the plan would stay in its previous shape.

There is only one question – how Schlieffen wanted to create such amazing forces. More than 65 corps in total was the force that Germany couldn’t mobilize at this time. But this is another story…