The Blue Max, 1966, John Guillermin
(based on the novel by Jack D. Hunter) 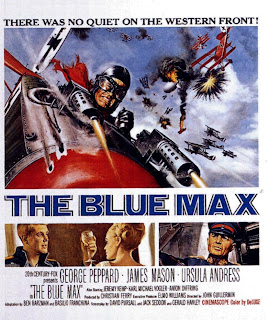 It's hard to write about this movie as a strictly WW1 movie, so I had to divide my review into two parts:

A romance put into the reality of the Great War. We have there an old general with a beautiful wife, a young pilot angry for glory and this is enough to make the things complicated. Certainly she is a femme fatale and this means you cannot refuse her wishes. If you did so, your hours are counted. No one wins, in the end.

There is a suitor you have to compete with. And a bottle of champagne to be opened each 15 minutes.

The background of this story is a desire of young, poor German soldier (starting from the mere infantry corporal) to achieve the status of the hero. He wants to be famous, to be admired, and - as this is his goal with the highest priority - to get "the Blue Max" (Pour le Merite - the highest German decoration for bravery). He is ready to do everything to achieve his goal - including cheating, throwing his friends to the wolves, and killing with no mercy... There is nothing more important that this small blue cross. 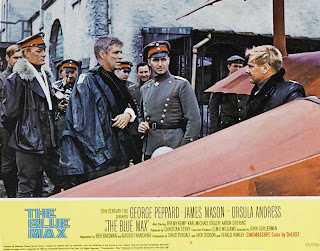 The World War I in the movie vs the reality:

I could write a story about it, but just briefly the main comments.

What is this stupid lever used by the German pilots to fire the machine guns? None of the German planes had something alike - the guns were fired by the controls mounted at the main control stick.

The second half of the movie is based on "the last German offensive" on the Western Front, meaning the Ludendorff Offensive that was released in March 1918. The problem is that the countryside looks like in the middle of the summer (or even autumn - look at the trees during the scene with passing below the bridge).

After saving Richthofen's life, the main character was asked to join Richthofen's Flying Circus - this was Jasta 11. But in the movie Stachel is in Jasta 11 from the very beginning. It's crazy.

All-lozenge Fokker Dreidecker. Have you seen something like this before? 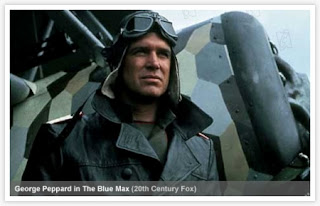 At the end of the movie Stachel comes to Berlin. The buildings showed in those scenes are typical English style ones - so probably the scene was filmed in GB or Ireland. Not a German city, for sure.

In the final scene - "the new German plane" is a Morane-Saulnier from 30s. Much too advanced to be produced at the end of the Great War.

And many, many more... It's a pity that again the director and his staff didn't care about the reality at all. Just a little effort was enough to make this movie much better. Following the reality of the Great War would make the plot more interesting. 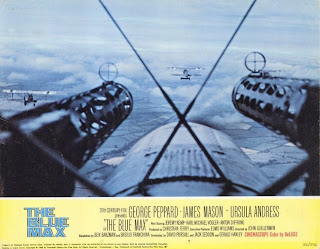 I'm not sure if I should recommend this movie. The romancing plot is weak, there is no WW1 reality in it. And the main, however interesting, story about the man desiring to get the Blue Max is not enough to blot the defects out.
And it is definitely too long - 2,5 hrs. is a long time. This story could be told in more interesting way in 1 - 1,5 hr.

And if you think you can enjoy Ursula Andress acting in this movie you'd be disappointed - she was dubbed by Nikki Van der Zyl.
(JD)
at 11:04 PM