Thomas Weber - Hitler's First War: Adolf Hitler, the Men of the List Regiment, and the First World War
„Hitler’s First War“ is a unique study on Hitler’s life, the study that wasn’t here before. Many of his biographers were telling the Hitler’s story, focusing on his rise to power and the Nazi era. 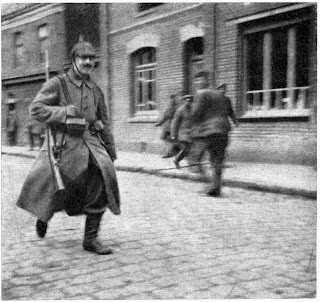 The only Hitler's photo that appeared in the official history of the List Regiment, published in 1932.

The book written by Thomas Weber is much different than the works we knew. First of all, the book is a result of a hard work inside the archives, analyzing the documents that no one has seen before. Secondly, Weber is trying to find the answer on the one of the most important questions of the modern history – what did „create“ Hitler as a politician and a leader?
It seems this question was already answered many times, as most Hitler’s biographers said that it was his military service during the Great War that turned him into a politician and the leader. The result of Weber’s work shows us a different picture.

The book is divided into two parts; the first one is focused on the details of Hitler’s military service and the history of his regiment. Thomas Weber painted a picture of List Regiment and this picture was based on the deep study of the archive documents. The average German regiment, consisted largely of conscripts, not enthusiastic volunteers – on the contrary to the popular myth. What is worth to note, there were many Jews in the List Regiment including the artist Albert Weisberger. 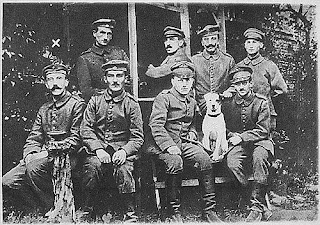 Hitler (x) and other runners from his regiment in Fournes, 1915.

Hitler’s military career was much different from the widely known stories and rumors – as Weber points in the book, many of them were created after the Great War by German propaganda. Adolf Hitler started his career as the mere private and finally was promoted to a corporal. That’s true, certainly. Not so known fact is that he was promoted just after the very first battle of List Regiment (during the first Ypres, 28-31 October 1914 – Hitler was promoted on 3rd November), and the reason were the heavy casualties in the battle – almost all survived soldiers were promoted. And this was the end of his service at the front line and the end of his military career: he was not promoted again until the end of the war. One of the reasons was that Hitler didn’t want to be promoted, as it could cost him the loosing of relatively safe post of the regiment’s runner.

Weber is analyzing his post as the runner, comparing it to the other posts among the regiment’s non-commissioned officers. The conclusion is as expected – what Hitler considered as „the front line“, was a safe post in the opinion of the soldiers from the real first line.
The second part of Weber’s book is telling us the story of the post-war years. With Hitler’s rise to the power in the background, Weber is showing us how Nazi propaganda (and Hitler himself) worked on creating the image we know now – a heroic soldier of the Great War who became a leader of powerful Third Reich. Weber describes this as „Hitler’s second war“ – the war against his former brothers in arms from the List Regiment, who could tell the world the real story of corporal Adolf Hitler. 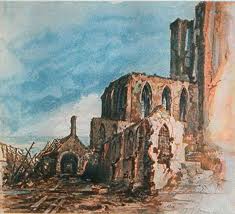 One of Hitler's paintings - The priory in Messines, December 1914.

Weber’s work is really a masterpiece, as most of his conclusions are based on the documents found in the archives. There is no point of re-writing his book here, this book is a real „must-read“ for anyone interesting in the Great War. You can find many interesting facts in there, including the story of Hitler’s Iron Cross, his wounds, the ways he spent the time on leave, how the famous photo (taken in the day the war was declared) was created and his relationship with other soldiers in the regiment.
(JD)
at 10:34 PM