The story of the airships - part one.

The story of the airships - part one.

Zeppelin! The legend of the Great War. Giant, slow airships that taken their name from German Count Ferdinand von Zeppelin - the man who, after his resignation from the army in 1891, devoted his full attention to airships. In his opinion the airships were the perfect weapon that might counteract the British naval superiority and strike at Britain itself, without being afraid of Royal Navy ships. 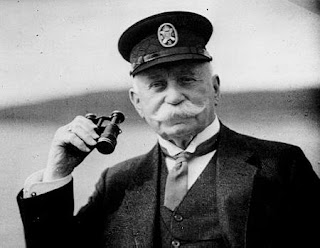 Today the words „airship / dirigible“ and „zeppelin“ are often considered synonyms and other airship designs are almost forgotten. Certainly there were some other designs in German service, as Parsevals and Schütte-Lanz. Those designs are forgotten today mainly because of the British and French propaganda and newspapers, who called all the German airships as „zeppelins“. Well, we have to admit that „zeppelin“ is much better name to use in the headlines than Schütte-Lanz. And this is worth mentioning here that the very first German name for the airship was Lenkbarer Luftfahrzug – a controlled air train. 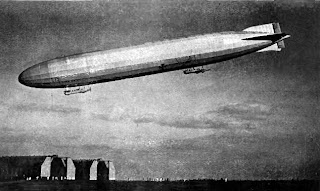 Naval airship L.15, about to land.

The zeppelin’s road to the active service was not easy – there were many opponents of airships among the German staff officers. Considered slow and vulnerable the airships had to prove their abilities and versatility.

Today, the same opinion prevails – the airships were just the waste of money, effort and primarily the lives of their crews. But is this a reasoned opinion?

The British had a real problem with the zeppelins and their air raids. There were no effective ways to protect the British from the bombs dropped by airships. The newspapers and propaganda posters were full of the pictures showing the burning zeppelin falling from the sky. Those pictures were very suggestive and they could be a morale-booster, but the British air defense was not as effective as in the propaganda materials. 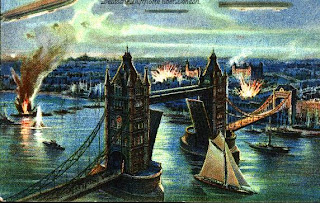 January 19th, 1915 was the day the idea of strategic air raids was born. On this day four German airships were sent on a mission over England - deep into the enemy territory. There were 4 people killed, 16 wounded and the damages were worth of ca. 1,5 million pounds (in today’s value).

Certainly we cannot compare this to the German air raids over Britain in the World War II,  but the airships (and later the heavy bombarders) made the British land a part of the battlefield. We cannot overlook how the British morale was influenced by the fact that the German airships were dropping the bombs on London, while the Germans in Berlin were safe and far away from any direct danger. 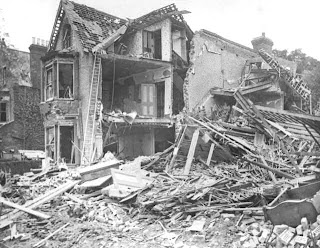 It was 1915 when the British (and some of the French) newspapers started the propaganda campaign against the airships. The air raids were really effective and still more and more airships were sent over London and the countryside. The press turned „the Zeppelins“ into „the Baby killers“ and the newspapers‘ pages were full of suggestive photographs showing the children with the dud bombs or near the damaged houses.

No one cared that the reality was a bit different – Wilhelm II, as British royal family relative, was against the air raids on London. This was the reason that during the first air raids the airships were dropping the bombs only around the British capital. Later on, he allowed the bombing of military targets in London, but dropping the bombs on important historical, royal and cultural buildings was strictly forbidden (certainly the airships were dropping bomb from the 10.000 feet, so it was rather impossible to hit only the military targets, but it was still far away from being the real „Baby killers“). (see the note below) 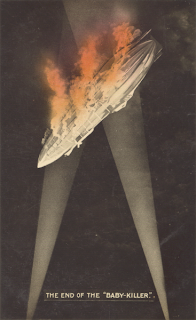 "The End of the 'Baby-Killer'" - British poster.
The air raids over Britain are widely known, but they were just a part of everyday routine for German airships. Reconnaissance missions and long range patrols were also very important, especially on the Eastern Front and over the North Sea. The German Imperial Navy owes most of its successful operations to the airship reconnaissance missions. The airships were active on most theatres of the Great War: Western Front, Eastern Front, North Sea, Balkans and even Africa. 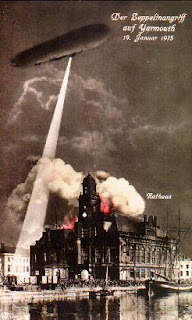 And were the airship bomb raids effective? There are many opinions that they couldn‘t change anything, but the statistics are proving them wrong: 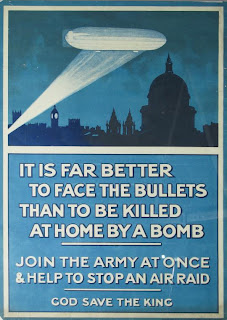 A curious detail is that Manfred von Richthofen wasn’t the only „flying baron“ of the Great War.  There was another one among the airship crews - Horst Julius Ludwig Otto freiherr Treusch von Buttlar-Brandenfels, „the Zeppelin baron“, one of the two airship commanders awarded with the „Blue Max“. He started his military career as wachoffizier on board of L3 and then, as a 25-years-old Lieutenant, he became a commander of L6 in November 1914. Then he was a commander of two giant airships L30 and L54. Zeppelin baron’s skills made him very famous - Buttlar-Brandenfels always managed to fly back home with his airship, even if it was damaged by the storm or AA fire. 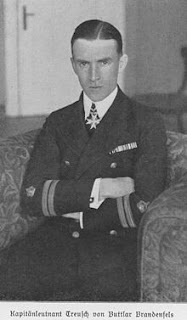 Note: Paradoxically the French airplanes that dropped their bombs on Karlsruhe (15th and 22nd June 1915) deserved this nickname much more than the German airships. During the first air raid on Karlsruhe – the city proclaimed as the „open town“ – the bombs were dropped during one of the church holidays, when the streets were full of worshippers (the casualties were 112 dead and 300 wounded). The second air raid was even worse – one of the main targets was the former railway station, the place where the circus was playing. The direct hit caused the death of 120 people, mostly the children...(JD)
at 10:13 PM

Email ThisBlogThis!Share to TwitterShare to FacebookShare to Pinterest
Labels: Aviation