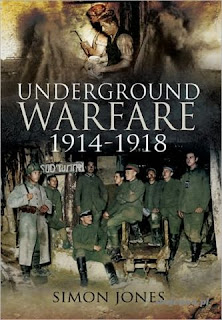 
Underground mine and explosion - this was one of the most feared words in the trenches of the Great War. The troops were more or less aware of the dangers they met – enemy bullets, artillery fire, bayonet, weather and disasters. All this was a daily routine on the front  - but being buried alive by the underground explosion that came without any warning? This was something really horrible, especially that soldiers were trying to hide in their dug-outs, looking for some moments of quiet and relaxation from the hell above. Underground warfare made those shelters as dangerous as staying out of the trenches during the artillery fire. 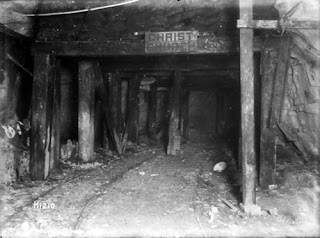 A tunnel, leading to the Christchurch cavern beneath Arras, France

This is not surprising that the information „there are the miners underground“ was one of the most feared ones – as most of the troops could only imagine how close the enemy miners were and they could only guess if the explosives were ready to detonate.

Sometimes they could see the spectaculars explosions made by their own miners – like the volcanos they were erupting along the enemy lines, spreading death and destruction. 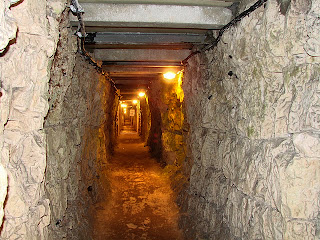 One of the preserved tunnels (Wikipedia)

„Underground Warfare 1914-1918“ is a detailed study about the underground warfare in the Great War. The book is full of personal memoirs and reminiscences, which help him to tell us the story of this not so known part of the conflict. The war is not divided in two parts – the troops „over the top“ and the miners „underground“. Jones managed to describe the connections between both of them; he shows us how the development of the underground warfare was depending on the general situation on the front. As an addition, we can often read what the troops were thinking about the miners and their works.

The book takes us through the evolution of the underground warfare, starting with old concepts from the 18th century and the necessary change of those ideas in the face of the new type of the conflicts. The chapters are: 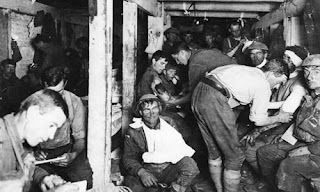 One of the British tunnels (Guardian)

Jones is trying to answer some important questions – were there any attempts to move the troops under the enemy lines? Were the underground dug-outs the best solution to survive the hard times at the front line? Why underground warfare was not as effective as it was expected to be? 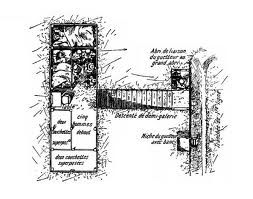 One of the drawings from the book.

Just the few examples but I hope you would learn from this book as I did. The book is also full of diagrams, maps and instructions helping us to understand the underground warfare, the conditions the miners met underground and their equipment and techniques. There are also a few photographs in the book.

This book is really worth reading, highly recommended.
(JD)
at 9:36 PM