The Front Among Rocks and Ice - The Great War in the Dolomites, part two.

The Front Among Rocks and Ice - The Great War in the Dolomites, part two.
This is the continuation of the previous posts related to the Italian Front of the Great War. This time there are some additional facts here.

The number of casualties on the Italian Front, especially the Dolomites, is not known. The international committees spent years on trying to find it out, but no agreement was reached so far.  The number of the soldiers who died in the Dolomites vary between 150.000 and 180.000. Most probably the higher number is the right one. 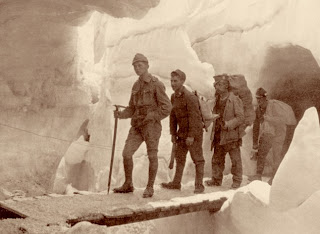 Austro-Hungarian troops on the way through the glaciers of Marmolada.

Those numbers include the deaths caused by all possible reasons, not only the battle casualties. After the war the commanding officers from the Italian front, both Italian and Austro-Hungarian ones,  were reporting that the losses in the combat were only 1/3 of the total number of casualties. The extreme conditions of the Dolomites - weather, frost, snow, avalanches, hunger, diseases, exhaustion - have caused 2/3 of the total losses. 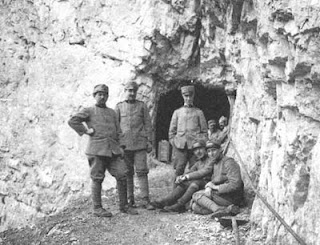 An avalanche was one of the most feared dangers. They were frequentative, dangerous and really deadly – 60.000 deaths are reported as the victims of the avalanches. Those reports are shocking: only during one night, 12/13 December 1916, more than 6.000 Austro-Hungarians were dead because of the avalanches. In the following three days the total losses on both sides – caused by the avalanche – were as high as 10.000.
One day a chaplain was conducting a drumhead service for more than 150 Austro-Hungarian soldiers. The avalanche came without the warning and all of them were buried under the snow. Other soldiers were trying to rescue the victims – despite the fact that this area was under the Italian fire. But no single shot was fired at the Austro-Hungarians during this hopeless rescue mission. 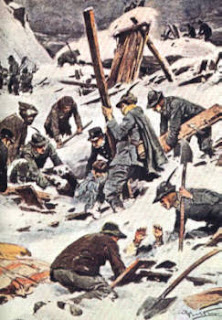 Avalanche! - a painting from the WW1 era. 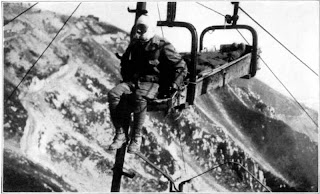 An everyday logistics and transport of the wounded was another challenge.

On the other side the Italian front was one of the few places the soldiers really loved to be. This may seems ridiculous, but the mountain landscape was so beautiful, than even with all this harsh conditions, death, cold, dangers, they wanted to be there. One of the soldiers wrote:
"We were informed that the very next day we would be released from our positions, and almost no one was pleased. (...) When we were going up to the snowy pass of Fanes, it was a dark, silent night. This silence was a strange, not common feeling and seemed to wrap around the long line of the marching men, all with the heavy rucksacks on their backs, tiredly climbing up the rock. This was the feeling I never felt again in my life, even if being released from the first line again."

There are many evidences like this one, telling us that the mountain landscape of the Dolomites, even during the merciless war, was extremely beautiful.  And many of the soldiers were showing their love for the mountains - despite the extreme harsh conditions and the death that was everywhere.
(JD)
at 11:10 PM

Email ThisBlogThis!Share to TwitterShare to FacebookShare to Pinterest
Labels: The Italian Front