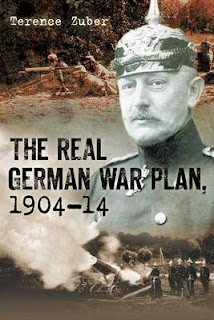 
Terence Zuber is something of a controversial figure regarding WW1 and the Schlieffen Plan.

He makes a series of bold statements concerning the plan (or lack of) and criticises several historians such as Holger Herwig and Anniker Mombauer.

Schlieffen as Chief of the General Staff in 1904-1905 played 3 separate war games and the battles took place in German or Belgian territory and there is no evidence Schlieffen played an outright offensive against France or Russia.

The 'classic' Schlieffen plan actually has written on it that it was intended for a one front war against France only! Even for this he calls for 96 divisions, 24 more than Germany actually had.

Schlieffen's planning over his tenure appeared to be to use Germany's interior position to mass against troops on one front and then use superior tactics to achieve a victory. Of course, this could not continue for ever.

There is nothing in the literature to suggest that the campaign in the west would be concluded in 6 weeks.

The map everyone knows is a combination of the Schlieffen plan map of 1905 and the events of 1914. The 1st army was intended to act as a flank guard and not to march around Paris. Furthermore, Schlieffen felt the Germans would be halted on the Oise and the Aisne.
(ES)