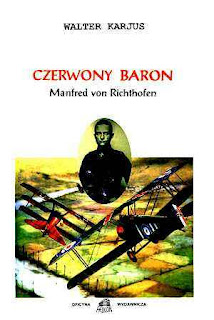 This is a short book, with 100 pages only – but in my opinion the best book about Manfred von Richthofen I have ever read.
The book has eight chapters, each one is a short single story:

- The triplane: the story about the 80th Richthofen’s victory. This is all what most people know about the WW1 in the air. The red triplane, a famous pilot in the cockpit and hopeless British (or French) pilots who cannot escape their fate. The stereotype in its pure shape. A very good introduction to the story about this legendary pilot.
The second part of this chapter is more serious, telling us about the Dreidecker, how it was created and used in combat. With some words about Richthofen added.

- Jasta: the story of WW1 aviation in brief – from the very beginning, then the first duels, looking for the perfect fighter plane idea, the troubles with synchronizer, the change from 1-to-1 duels to formations of dozens of aircrafts. The reason why German Jastas were created. This story ends with the Boelcke’s dead.

- Ritter Manfred von Richthofen: The one and only, unique and legendary. Why? What makes Richtofen an iconic symbol of the Great War? Author is trying to answer all such questions and in my opinion he is doing it right. The story ends in the moment Richtofen became the commander of the very first Jagdgeschwader.

- A lone warrior, Werner Voss: a short break in the main story, but also very interesting. There were many other aces among German pilots, but the author decided to tell us about Voss. It was a very good choice and the moment was perfectly chosen – remember that the previous capitol ends with the creation of Jagdgeschwaders. Voss was a lone warrior, a perfect fighter but without the traits of a leader. „Only the whitebeard or philosopher can afford to be a loner. Voss wasn’t a philosopher, so that’s why he didn’t become a whitebeard“. The era of lone fighters in the sky has gone away and Voss has gone away in the same time.

- Anatomy of the fight: each and every fighter has his own tactics and dogfight technics. Here are some of them: Mc’Cudden, Ball, Guynemer…

- The Flying Circus: the period from June 1917 to April 1918. All those frantic battles in the sky, but told with the background details.

- Pour le Merite: a kind of psychological study on the pilots, their behavior, traits and limitations. Many interesting details from their life and service.

At the end there are two appendices: a list of Richthofen’s air victories and the detailed study on his planes. Camouflage, marking, what was red and when. Really a perfect work.

The book is really interesting, written in the way one reads it with pleasure. The language used in it is very specific, full of irony and sometimes sarcasm. The author mentions many myths from the era and is proving them wrong in the ironical way. There is no pathos, we can see that the pilots were ordinary men, with their strengths and disadvantages, and many times with their kinks.

A short example of the style it is written:

„11th Squadron was in the permanent status of rearmament. The pilots didn’t manage to get familiar with their nice Sopwith Pups, when new child of wonder from Thomas Sopwith factory has arrived, the already known Triplane. However Brown has preferred Pup. I know this sounds as a shocking, maybe even infantile statement, but this was the custom in those days. The squadrons seemed to be a piece of Byzantine craftsmanship mosaic. Someone wants to fly Nieuport, Brown preferred Pup, someone else preferred Triplane. Let’s imagine today the pilot who wants to fly F-16 instead of MiGs received by his squadron.“

And last but not least – there is a riddle. Who is the author of this book? Walther Karjus* as written on the cover? Or someone else?

Karjus couldn’t write the second part of the book, for sure. Especially the last chapter which was written by the contemporary author for sure. The owner of the copyright is Witold Chrzanowski, probably the Polish historian by that name. The only problem is that Chrzanowski had written many books but all of them are about the early times: ancient Rome and Slavic history.

Is Chrzanowski just an editor of the material somehow left by Karjus? But there is no „translated from …“ description in the book. Probably this is a book written by Chrzanowski who didn’t want to give himself a bad name by publishing a story from the Great War, especially written with a sense of humor.

Karjus was a pilot in Jasta 11 and Jasta 75. He was a valiant observer who had been badly wounded and had lost his right arm. Fitted with a prosthetic device he became a pilot and then flying instructor. One confirmed air victory on 21 October 1918.